Blues’ Gunnarsson out for season; Barbashev has ankle surgery 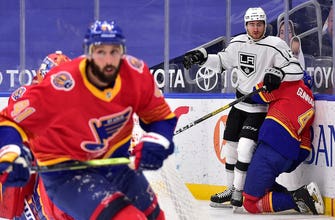 It looked bad when it happened, and sure enough, St. Louis Blues defenseman Carl Gunnarsson is out for the season.

Gunnarsson suffered a right knee injury in Monday night’s loss to the Los Angeles Kings. He is currently undergoing further orthopedic tests, but the one certainty, the team announced, is that he is out for the season.

Gunnarsson crumpled to the ice after going for the puck against the boards in the second period Monday. He had to be helped up and was supported under each arm by teammates Robert Bortuzzo and Jacob de la Rose while leaving the ice without putting any weight on his right leg.

Gunnarsson, 34, has two assists and six penalty minutes in 12 games this season. He became a regular part of the blue line when Colton Parayko (lower body) got hurt.

The Blues also announced that forward Ivan Barbashev had successful surgery on his left ankle Tuesday morning and will be re-evaluated in six weeks.

Barbashev, 25, has been out since Feb. 18, when he hurt his ankle in the third period of the Blues’ 3-2 overtime win over San Jose. He was placed on injured reserve the next day. Barbashev has has two goals and four assists in 17 games this season.

//Attach the script tag to the page (before the first script) so the magic can happen. let firstScript = document.getElementsByTagName('script')[0]; firstScript.parentNode.insertBefore(script, firstScript);

When is Aaron Rodgers hosting ‘Jeopardy!’? What to know about game show’s 2021 guest host schedule
Seattle Mariners doing damage control with their players after Kevin Mather’s comments
We use cookies to ensure that we give you the best experience on our website. If you continue to use this site we will assume that you are happy with it.Ok