Cardinals to welcome fans back to Busch for 2021 season 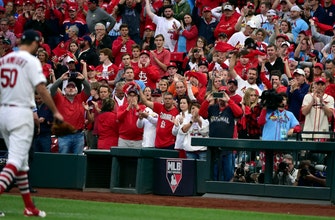 ST. LOUIS — Baseball fans, the St. Louis Cardinals are opening the doors for you at Busch Stadium this season.

The Cardinals announced Thursday morning that their reopening plan, developed in partnership with the office of Mayor Lyda Krewson and the city’s health department, has been approved. The plan calls for changes to game-day operations and limits attendance to 32% of capacity starting with the home opener against the Milwaukee Brewers on April 8.

“We are excited to have our fans back in the stands for the upcoming season,” Cardinals President Bill DeWitt III said.

Ticket sales will begin with April games. The Cardinals will give season ticket holders the first opportunity to buy tickets to April 8-14 games against the Brewers and Washington Nationals and April 23-29 games against the Cincinnati Reds and Philadelphia Phillies.

Aside from NLCS and World Series games at Globe Life Field, which hosted limited crowds, all Major League Baseball games were played without fans in 2020 due to the COVID-19 pandemic.

Numerous changes will be made to prevent the spread of the virus. Fans will be seated in socially distanced pods of no more than four people, masks will be required for all fans except when they are actively eating or drinking, all transactions will be cashless and all game tickets will be delivered electronically via the MLB Ballpark app. Guests will be directed to enter and exit the ballpark through one of six designated gates to prevent crowding, bags will not be permitted (except medical and diaper bags), hand sanitizer dispensers will be placed throughout the ballpark and staff members will be subject to daily health and temperature screenings.

In addition, the organization is upgrading the stadium’s HVAC systems and will use electrostatic sprayers and EPA-registered disinfectants on stadium surfaces.

“St. Louis at our very core is a baseball town, and I know our fans are ready to get back to Busch Stadium for another exciting season,” Krewson said. “Thank you to the entire Cardinals organization for working with us to develop a comprehensive and thoughtful reopening plan that prioritizes everyone’s health and safety.”

Jim Boeheim continues beef with Syracuse reporter by mocking his height
Washington Football Team’s Jennifer King on making history as first Black woman to be full-time NFL coach
We use cookies to ensure that we give you the best experience on our website. If you continue to use this site we will assume that you are happy with it.Ok