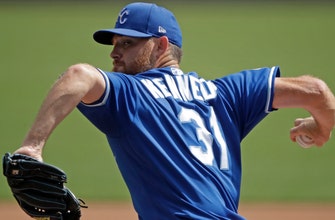 SURPRISE, Ariz. — Right-hander Ian Kennedy has signed a minor league contract with the Texas Rangers and will be in major league spring training with a chance to be compete for a spot in their bullpen.

“He has to earn the spot, and he’s perfectly comfortable that,” Young said. “Ian called me right after we finalized the deal and actually thanked me for not reaching out to him. He had a lot of teams, and personal relationships throughout the game, reaching out to him, and he said actually that played into it, the fact that I didn’t reach out to him personally.”

Kennedy spent the past five seasons with Kansas City, where he made the transition from starter to reliever the past two years. He had his only 30 MLB saves in 2019, but was limited to one start and 14 relief appearances last season because of a left calf injury. Young and Kennedy were with the Royals together in 2016 and 2017.

//Attach the script tag to the page (before the first script) so the magic can happen. let firstScript = document.getElementsByTagName('script')[0]; firstScript.parentNode.insertBefore(script, firstScript);

JJ Watt’s ‘mitochondria’ tweet sends Bills, Browns fans into free-agency theory frenzy
Which women’s college basketball conference tournaments will most impact the bubble?
We use cookies to ensure that we give you the best experience on our website. If you continue to use this site we will assume that you are happy with it.Ok